Alexander, aged seventeen, is a music scholar in the sixth form at Abingdon School, where he studies the horn with Matthew Cooke. He has recently obtained his ABRSM diploma, an advanced qualification usually pursued by players who become professional musicians. As first horn in the National Children’s Orchestra for three years, he played at a number of prestigious London venues including Cadogan Hall, the Wigmore Hall and the Queen Elizabeth Hall, as well as at Colston Hall in Bristol, Leeds Town Hall and at Birmingham’s Symphony Hall in the National Children’s Orchestra’s thirtieth-anniversary celebration concert. He has also been a member of the Thames Vale Youth Orchestra and the Berkshire Youth Orchestra and currently plays in the Oxford Concerto Orchestra.

In addition to the horn, Alexander studies the piano, percussion and drum kit and currently plays percussion in the Berkshire Concert Band. He obtained Grade 8 singing with Distinction at the age of fourteen and Grade 8 Piano at the age of thirteen. Alexander plans to study medicine at university. 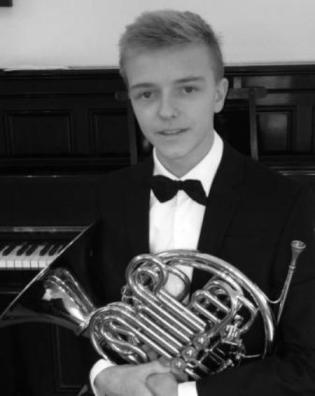