Olivier Bonnici was born in Grenoble, France, to a family of painters and violinists. He studied at the Conservatoire National Supérieur de Musique in Lyon, before coming to England, where he later became an Associate of the Royal College of Music, in performing. He is married to Rosalind, also a violinist, with whom he founded the Bonnici String Quartet, with Jacqueline Johnson as the cellist, in 1996. Oliver performs regularly as a soloist in the Oxford area and beyond. He performed the Brahms Double Concerto with Jacqueline Johnson with the Radcliffe Orchestra in 2012. Other recent solo appearances have included the Tchaikovsky violin concerto (2015), the Sibelius violin concerto (2013) and the Brahms violin concerto (2011), all with the Radcliffe Orchestra. He has also played concertos with the Abingdon and District Music Society and the St Giles Orchestra, and he played the violin solo in Vaughan Williams’s The Lark Ascending with the St Edward’s Singers.

In 2003, he recorded the CD for the internationally successful series Fiddle Time Sprinters, published by for Oxford University Press. Olivier is Head of Strings at Headington School. He has been leading the Musicians of the Dreaming Spires, a well-respected ensemble made up of local professionals and directed by Christopher Redgate, since their foundation. 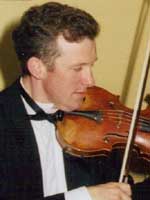