The orchestra gives opportunities to local soloists to perform concertos with us, and we are especially keen to enable young musicians to do this. Our conductor, Christopher Fletcher-Campbell, teaches music at Abingdon School, where he nurtures and encourages young musicians. Many of our soloists come from there, although we are happy to consider soloists from any school and we perform with adults too.

Virtually all the soloists who have played with us have performed to an astonishingly high standard – especially so, given that most of them are young.

On 17 and 24 November 2013 our soloist was Osman Tack, who played Beethoven’s fourth piano concerto with us in St Helen’s Church, Abingdon, and St Margaret’s Church, Oxford.

On 2 March 2014 our soloist was Alexander Foster, a gifted young horn player.

On 25 January 2015 our soloist was Jacqueline Johnson, a highly accomplished cellist.

On 3 May 2015 our soloists were Paul Harris and Jean Cockburn, two distinguished clarinettists.

On 22 May 2016, James Anderson-Besant, a talented young musician and budding conductor, played the organ part in Saint-Saëns’ “organ symphony”.

We welcomed Leon Wu back on 13 November 2016 to play the solo part in Saint-Saëns’ second piano concerto.

On 26 February 2017 our soloist was the highly regarded young Japanese pianist Mami Shikimori.

On 19 November our soloist was Leo Appel, well known locally as a highly talented young violinist (and increasingly known to a wider audience).

On 18 June 2018 our soloist was Ashwin Tennant, only 15 years old, who gave a wonderful rendition of Grieg’s piano concerto.

On 11 November 2018, our soloist was Dominic Piers Smith, an outstanding amateur pianist who has performed as a soloist with the London Philharmonic Orchestra.

On 23 March 2019, we accompanied a singer for the first time, when Anousheh Bromfield sang three concert arias by Mozart.

On 24 November 2019, our soloist was young pianist Ashwin Tennant, who gave a brilliant performance of Beethoven’s third piano concerto.

On 1 March 2020, we were joined again by the acclaimed Oxford-based cellist Jacqueline Johnson, for a performance of Lalo’s cello concerto.

If our late summer concert, scheduled for 5 July, goes ahead, we will be joined by a professional tuba player, who will perform Vaughan Williams’s tuba concerto. Further details will follow when the situation becomes clearer. 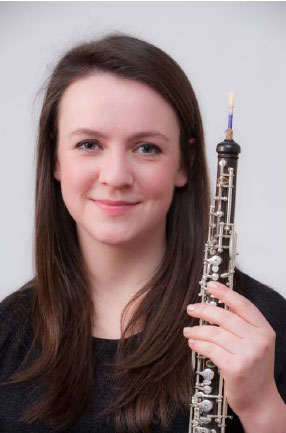 Emma Gibbons, who played Richard Strauss’s oboe concerto with us in June 2013