Now twenty-one, Osman has been playing the piano since the age of seven and has participated in many music festivals and competitions, where he has earned numerous prizes and distinctions. In 2010 he was the Chandos Young Musician of the Year, a title earned by several musicians now enjoying distinguished careers. Osman has been a finalist in the Emanuel Trophy Piano Competition, the Oxford Philomusica concerto competition and the Oxford University concerto competition.

In addition to his studies and piano performances, Osman, who is also a highly skilled violinist, enjoys playing in chamber orchestras and chamber groups, and accompanying other soloists, singers and choirs. He is also a member of the choir of St John’s College. 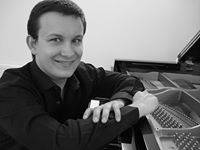