Sixteen-year-old Charlie Woodhouse has grown up in a musical household in St Albans. His father is a professional musician, his mother plays the flute and his sister is a competent violinist, pianist and singer. Charlie started learning the cello when he was five years old. His teacher, Sara Bethge, used the Suzuki method to encourage her students to enjoy performing. Charlie took his Grade 8 in 2015, gaining a mark of 96 out of 100, and in January 2016, he joined the junior department of the Guildhall School of Music and Drama, where he spends every Saturday in term time following their special curriculum for gifted young musicians, which includes chamber music, orchestral playing, individual lessons and advanced music theory. Charlie’s teacher at the Guildhall is Alfia Nakipbekova, who was herself taught by Mstislav Rostropovich.

Charlie performs regularly in recitals at the Guildhall and in other concerts Hertfordshire. In 2016, he won the St Albans Young Musician competition in the solo strings category (there isn’t an overall winner), and as a result of this, he took part in a recital given by the competition winners. In September 2017, he gave a full-length recital for charity at The Limes in Standlake, accompanied by Peter McMullin on the piano. His performance of David Popper’s Hungarian Rhapsody was very well received. He leads the cello sections in the St Albans Philomusica and the Hertfordshire Schools Symphony Orchestra, and he is a member of the Hertfordshire County Youth Orchestra.

Charlie learns the piano with Jennifer Purvis in St Albans, and he is studying for A levels in music, German and psychology at Beaumont School. 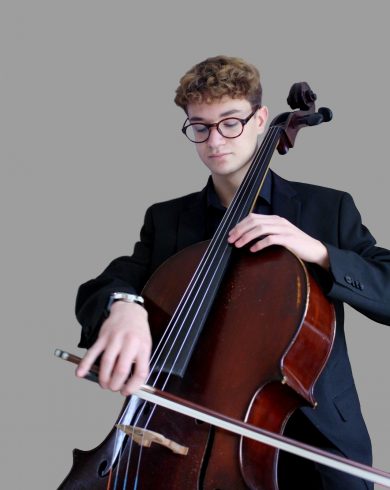